Every Neonatal Intensive Care Unit (NICU) bed at UC Davis Children’s Hospital is now set up with a webcam thanks to a Children’s Miracle Network Hospitals grant. Th webcams allow parents and families to see their baby through a secure connection from a home computer, tablet or cellphone 24/7, even when they are not at the bedside. The expansion to every bed is the latest development in the UC Davis FamilyLink program, a NICU webcam program for patient families. 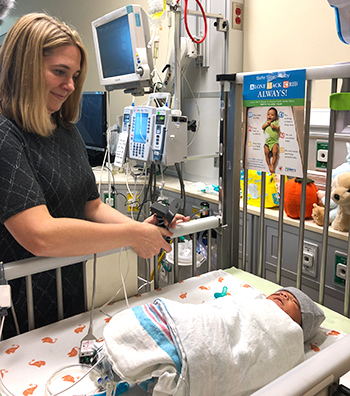 “This is the best thing. When I can’t make it in because I am sick or out of town, I love the webcams because I can see him if I’m missing him,” said Ruby Moran, whose son is in the NICU.

The program now also features an upgraded web portal with increased security and a user-friendly interface. A streamlined enrollment process gives families access to FamilyLink upon admission to the NICU.

“Our families come from all over Northern California, some from very far distances, and many are here for a long time. Many have to go back and forth for their job or to care for their other kids, and it’s stressful to have a baby in the NICU,” said UC Davis neonatologist Kristin Hoffman, who started the FamilyLink program in 2015 along with UC Davis Health technical supervisor George Wu. “This is a way that families can still be connected to their baby when they are not able to be at the hospital.”

Aaron Ridgway live 90 minutes from UC Davis Children’s Hospital. He and his wife use FamilyLink each night to see their baby in the NICU.

“It has been indispensable as a means of staying connected to our baby. Frankly we wouldn’t have the same attachment or rapport with his carers without it,” Aaron Ridgway said.

The program has been customized by UC Davis Health. Webcams and flexible tripods are mounted on infant isolettes, warmers and cribs in all 49 NICU beds. Hoffman noted that usage of the system has jumped up since access was expanded in October.

“Since we expanded access to our system, it’s been amazing. I’m seeing many more families using the webcams. That’s been so rewarding because we’ve worked really hard to make it available for all families who come to our NICU,” Hoffman said.

Put your money where the miracles are